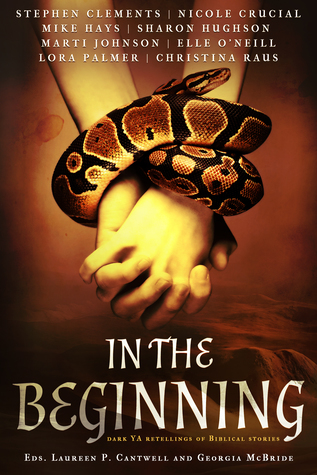 In the Beginning: Dark Retellings of Biblical Tales

In the Beginning (Oct. 25, 2016) –Eight authors come together to build a powerful collection of dark young adult short stories inspired by the mysteries, faith, and darkness found within the Bible. Old Testament and New Testament, iconic and obscure figures alike are illuminated, explored, and re-envisioned throughout this charity anthology from Month9Books.

Today, we are lucky enough to have two of the spectacular authors from this new anthology with us!

Elle O’Neill loves reading and writing—from her first all-nighter as a seven-year old with autographed copies of David Adler’s Cam Jansen books to her high school and college English and creative writing classes. She believes that you can fall into the world of a book and find yourself. While she sometimes has a hard time separating fiction from reality (or is it that she prefers not to?), she likes to think that’s a whimsical asset. She enjoys reading just about anything, but treasures underdogs and bluestockings—their trials and successes feel close to home.

Nurtured through a troubled teenhood by Aslan in Narnia, Sharon Hughson has long appreciated the power of the written word. She has published romance and women’s fiction, but her dream is to write young adult fantasy, a genre she credits for keeping her alive during her parents’ turbulent divorce and the chaotic readjustments that followed. Sharon fuels her imagination with recollections from years of motherhood and a lifetime of experience working with young people, at church and in public school. She resides in Oregon with her husband, sons and three cats, where she spends her non-writing hours substitute teaching, reading, playing piano, enjoying the outdoors and scrapbooking her family’s memories.

Yay!! These two talented authors have graciously agreed to an interview. Welcome ladies!

Our Question: What’s the one topic you were hoping a blog host would ask you that they haven’t yet? Tell us what you’ve been dying to discuss. Here’s your chance! : )

Since this is my first published story and my first ever guest post for a blog, there are lots of questions I’m open to being asked and to answering! I didn’t want to scare you all away from my story by writing too much, or too much about things you might not be interested in, so I asked a good friend (thanks, Jay!) what he might want to ask the writer of a short story – what would his burning question be? Jay’s great at questions and he’s really reflective, so of course his question was, quite simply: WHY? Why this character, why this story, why this way? I’m going to do my best to talk about those questions.

My story is that of Barabbas. That may not be a name that comes readily to mind unless you’re thinking about Easter. It was actually right around Easter that I decided Barabbas would be the focus of my story. In the Bible, Pontius Pilate offers the crowd the opportunity to free one of two men. Jesus is one. Barabbas is the other.

Imagine. Even outside of Biblical stories: you are one of two people and one of you is going to die. And people – nameless, faceless, unknown-to-you people – get to decide which one of you lives.

Beyond how viscerally upsetting most of us would find those circumstances, there was another element that was important to me when thinking about a Biblical “character” to focus on – Barabbas really has no backstory. We know he’s imprisoned. We know the crowd selects him to live. There were two things I really enjoyed about this. First, it gives me a lot of latitude for constructing who he is and how he gets into this situation. Secondly, we need to remember that the society that allows (in fact encourages) a crowd to spontaneously decide who lives and dies is the same society that also imprisoned both of these individuals to begin with. That’s not to say the society had no reasons, but it is to say that we have reason to question them – and that it’s okay to question them.

So I suppose I’ve tackled why this character? and why this story? but not why this way? My story begins with Barabbas being swept away into an intense reality show environment – he doesn’t quite understand where he is, why he’s there, what will be asked of him (questions we all ask ourselves at one point or another). His “crowd” is known as The Masses; they serve in the role of the crowd making the decision in the Bible, but they are also all of us. When we watch reality TV at home and decide who contestants are, what they’re about, what they deserve…we are The Masses, aren’t we? The stakes may be different but, really, who’s to say that—someday—the stakes couldn’t be exactly the same. Just the same, Barabbas is also all of us—he waivers, he spooks; he has frustration, but also resolution; he has desires, even if he doesn’t understand them; and he tries to make good decisions without hurting others, even though that isn’t always possible.

The role of Jesus is a quiet one in the story. He’s the ultimate—he’s an aspirational character for so many of us, and yet human in figure. He exists as us, and so he can be treated as an equal in the story, and yet he serves as a kind of flawless human—Who will The Masses root for? Who would you root for?

In many ways, I think I was aiming for dark satire—thinking of stories like “The Lottery” by Shirley Jackson—and an exploration of what if, like Stockton’s “The Lady and the Tiger.” And those are scary stories, even though they may not have gore, ghosts, or even sinister characters. Perhaps it’s the relatability of these scenarios—places we’ve never been, situations we have never met—that creates the terrifying nature of them. There’s just enough reality to enable you to see yourself there—and to consider the possibility that maybe, just maybe, this could be real, somewhere, someday.

I hope everyone takes the opportunity to explore In the Beginning – it has a lot to offer readers. The stories come from lots of angles, cover a lot of territory that YAs face, and tackle that territory in some surprising ways. It’s a valuable collection and I’m lucky to be among these writers, lucky to have my story alongside theirs. Thanks so much for inviting me to write this post.

Why demon possession? I mean seriously, of all the hundreds of cool and awesome stories in the Bible, why would anyone want to imagine being possessed by a demon?

To answer that: IN THE BEGINNING was specified as dark Biblical retellings. I had several fun ideas when I first decided to write a story for the anthology. One of them was about Naaman’s wife’s Hebrew handmaid. And it had a COOL twist at the end that was dark, dark, dark. *rubs hands together while smiling maniacally*

But when I considered all the ideas, I realized the story about a boy possessed by a demon was most compelling because it RELATES TO US. Not that I think a bunch of people are walking around possessed by demons. But on a metaphorical level we ALL have our demons. And most of the time we need help to get them exorcised. That’s what my story “The Demon was Me” is all about: finding help to get back in control of our lives when our demons take over.

Also, I knew this would be a difficult story to pull off. I’m not much for writing in first person because it limits how much information I can give a reader. But in order for this story to work, it had to be written with Scisco as the narrator. Otherwise, the reader wouldn’t experience the conflict of having a foreign entity taking control of their body. Because much of the conflict takes place INSIDE Scisco’s head. Just like most of our issues are internalized.

So this story was a challenge to my ability as a writer as well as to the idea that we are in control of our lives and destinies. And why didn’t another interviewer ask about that? Because none of them are the AMAZING Julie Reece. Thanks for having me, Julie.

Ha! Terrific answers, both of you! I love hearing about the creative process and getting a peek inside the imaginative mind of authors. Your stories sound amazing. I can’t wait to read them. Thanks so much  for being here today, guys. XOXO

Five (5) winners will receive a digital copy of In the Beginning: Dark Retellings of Biblical Stories (INT)

Daniel and the Dragon by Stephen Clements
A troubled orphan named Habakkuk dutifully follows his master, the prophet Daniel, into temples of blood-thirsty demon-gods, battles with unspeakable horrors, and bears witnesses to mind-breaking evil until his master’s zealous defiance of the king’s law seals their fate.

Babylon by Nicole Crucial
Far above the earth, in Second Eden, where moments and eternities all blur together, young Babylon befriends Sefer, the Book of Life. As Babylon awaits the moment she’ll fulfill her destiny, she and Sefer try to understand the world in which they live.

Last Will and Testament by Mike Hays
A homeless young boy, Baz, bears the weight of humanity on his shoulders and upon his body. When dark forces test a new-found friendship, Baz’s willingness to bear the ugliness of their world will be shaken.

The Demon Was Me by Sharon Hughson
Based on the story of the demon-possessed boy healed by Jesus, this tale provides a glimpse into a post-apocalyptic world where a teenage boy seeks to journey to a better land and yearns to discover the kind of man he’s meant to be, only to be hijacked by an evil spirit intent upon chipping away at the hope, faith, and resilience of its host.

The Deluge by Marti Johnson
A non-believer shares the story of Noah’s ark-building and the deadly downpour that follows. Fear, faithlessness, and the fallibility of mankind collide in a community where second chances aren’t unlimited and a better-late-than-never attitude just might be your doom.

Condemned by Elle O’Neill
Just sixteen-years-old, Barabbas finds himself pulled out of Routlege Academy and into a reality show competition—against Jesus himself—where the reward for the winner is life.

First Wife by Lora Palmer
In a first-person retelling of the saga of Jacob, Rachel and Leah, themes of family, deception, guilt, and heartache emerge amidst the first days of Leah’s marriage to Jacob—a marriage mired in trickery a mere week before Jacob was to marry Leah’s sister Rachel.

Emmaculate by Christina Raus
Based on the story of Mary’s Immaculate Conception, we enter the troubled mind of Emma, who finds herself torn between her religious upbringing and the purity ring that binds her to her boyfriend and the pregnancy that results from her relationship with another boy.